Remnants of Barry: Flash Flood Watch This Afternoon and Tonight, 7/17/19

Flash Flood Watch this afternoon and tonight.  The remnants of Barry will move through the area from 2:00 this afternoon through the overnight hours.  There could be showers and possibly thunderstorms which could bring up to 1 inch of rain, causing local flooding of low lying areas, streams, and roads.

...FLASH FLOOD WATCH IN EFFECT FROM 2 PM EDT THIS AFTERNOON THROUGH LATE TONIGHT...

The National Weather Service in Upton has issued a
* Flash Flood Watch for portions of northeast New Jersey and southeast New York, including the following areas, in northeast New Jersey, Bergen, Essex, Passaic, Union, and Hudson.
In southeast New York, New York City, and Southern Westchester. *
From 2 PM EDT this afternoon through late tonight
The remnants of post tropical cyclone Barry will move through the area later today and tonight bringing the potential for heavy showers and thunderstorms. Excessive runoff could lead to flash flooding of urban and poor drainage areas. Some fast- responding small streams could approach or exceed bank full.

* Rainfall totals are expected to range between 1 and 2 inches with locally higher amounts. Rainfall rates of one inch per hour or more are possible.
PRECAUTIONARY/PREPAREDNESS ACTIONS... A Flash Flood Watch means that conditions may develop that lead to flash flooding. Flash flooding is a very dangerous situation. You should monitor later forecasts and be prepared to take action should flash flood warnings be issued. 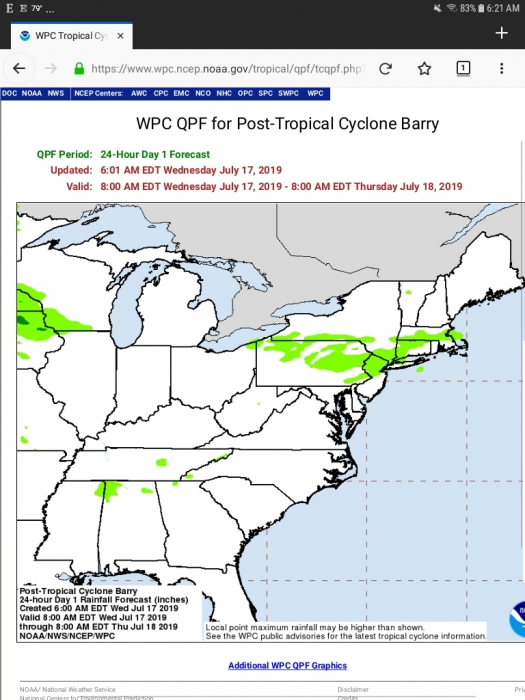 I have had time now to really look at the latest model runs. While I understand the National Weather Service's caution, I do not foresee a significant rain risk this afternoon. If we get the storms, and that is still an if, they will almost certainly be after dark tonight and maybe not until late evening.

Thanks, Max, as usual.

The NWS has issued a Severe Thunderstorm Watch for, well, everywhere, until 10:00 this evening. Seriously, the watch runs from South Jersey to Cape Ann in Mass and west to Elmira NY and Harrisburg PA.

The image below has the watch area superimposed on a radar image from earlier this afternoon, and you can see how widespread but sporadic the activity is. Most likely, if we do see rain, it will be later this evening.

This is an unstable system though and things could change.

In the meantime, it is just so oppressively hot and humid! I wish it would rain, in the vain hope that it would cool things down.

Return to all Discussions
Return to Weather and Transit related